September 15 (physically about 20-30, but even older mentally)

Akio Ohtori (鳳 暁生, Ohtori Akio) is the closest character to a main antagonist the series has. He is the acting chairman of Ohtori Academy, the fiance of Kanae Ohtori and the older brother of Anthy Himemiya.

He doesn't appear in person until the Black Rose Saga, is an important character in the Akio Ohtori Saga and is the main antagonist of the Apocalypse Saga. As an individual, he is Akio Ohtori, End of the World and the prince Utena was looking for.

Much like Lucifer, Akio is a beautiful individual who was once on the side of good. He was once the kind, noble Prince Dios only to become a fallen hero who manipulates and corrupts the people around him. He's often dishonest and it's clear that he'll do whatever it takes to make himself seem trustworthy though small actions such as hiring teachers who are predatory and nasty to students or by preying on Utena's feelings for her prince. He's a man who seems to have an interest in the stars, even referencing the Morning Star at one point. In reality, he has no interest in them and merely uses them alongside his illusions to decieve others.

Akio is also a remarkable playboy with many lovers. The list includes Utena Tenjou, Kozue Kaoru and even Kanae Ohtori's mother. Akio's trademark symbol is his jazzy automobile, in which he invites friends, Duelists, and potential sexual partners to take a midnight ride. However, it's clear that he's a man who engages in dubious consent with his partners and in Anthy's case outright rapes her for his own gratification and control over her.

Akio appears to dominate his sister Anthy both personally and sexually; their incestuous and power-driven relationship is key to Anthy's behavior in both the anime (where Anthy is held in thrall to her brother) and the movie (where events cause the balance of power to shift dramatically). Unlike Anthy, he is a capable chef who can cook really well compared to his sister; another ascept which forces Anthy to depend on her brother.

However, the power is not completely held by Akio, as he is dependent upon Anthy to carry out the dueling game as the rose bride and use her supposed magic as a witch. In the anime, Akio pretends to hold genuine love for Anthy, manipulating her by claiming to feel her pain, despite often using brute force with her and usually being shown as the dominant and sole-speaking figure in their conversations, as well as claiming her pain is caused by the world rather than himself. He is driven by his selfishness and very nature to continue his role in the duels.

On some level, he's a pitiful figure who tries to make himself seem better. When he tells Utena about Lucifer's fall from grace, he claims that Lucifer chose to fall from grace. In actuality, Lucifer's actions were out of envy and pride and he only chose to go to Hell fearing the power of the Son of God. He grieves over his lost role of the Prince, but —as Anthy herself points out— he chose the path he walked down. This implies that despite being an adult on the outside, he's unable to grow up and has chosen to "die" rather than live on as an adult.

In his youth, Akio and Prince Dios were apparently one and the same, but he became corrupted and lost his purpose as a "prince". Given the origin of his name and his role in the story, Akio may be compared to a fallen angel. In the manga, Anthy Himemiya split the two intentionally; in the anime, his fall is more vague; it appears to be catalyzed by Anthy, but likewise also by his own loss of faith in the world which tortures both him and his sister. In order to regain the power he lost when he lost his nobility, he creates the Dueling Game in order to create a Duelist with a sword noble and powerful enough to break the Rose Gate sealing his lost power. In the movie, "Dios" is merely an illusion created by Anthy to hide her brother's flaws so she can have a hero to believe in.

In the anime, Akio uses Utena Tenjou's familiarity with his "better half" to his advantage and becomes her lover, in order to test whether or not her nobility is strong enough to choose saving her friend over being with her supposed-Prince.

During the movie, Akio himself is dead and is thought to have been killed by Anthy, however in truth he kills himself after discovering Anthy was lucid when he drugged her. Unlike the series, he is openly referred to as the "Lord of the Flies" instead of being a Lucifer analogue like the TV series. His spirit returns during the film's final act to prevent Anthy and Utena leaving Ohtori Academy using his castle as a giant truck. 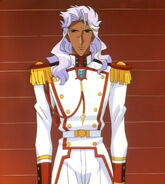 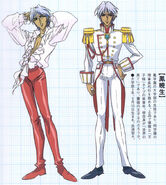