Chu-Chu is a monkey in Revolutionary Girl Utena that serves as comic relief.

Chu-Chu's origin is not delved into, except for the fact that he is Anthy Himemiya’s friend.

Chu-Chu, to some viewers is funny. He is very small and looks like a monkey. He wears an earring in his left ear and and wears a tie that is exactly the same as Anthy's, and other girls at Ohtori.

Before Utena Tenjou and Anthy Himemiya get to know each other, Chu-Chu is considered Anthy's only friend. He is her confidant and attempts to serve as her protector from Kyouichi Saionji as Chu-Chu has an immense dislike for the student council member. Chu-Chu cares much for  Anthy, and immediately takes a liking to Utena as he realizes she is there to protect Anthy as well. In the last episode Chu-Chu leaves his tie on Akio Ohtori’s desk, just as Anthy leaves her glasses. Chu-Chu leaves with Anthy to assist her in finding Utena.  He makes a cameo appearance in the movie in F-ko's first scandalous tape, in a tiny scene where he has to deal with Nanami Kiryuu (in her cow form). 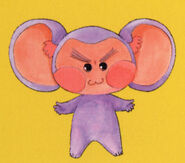