student in her last year of highschool

Kanae Ohtori is the fiance of Akio Ohtori and the soon to be the sister-in-law of Anthy Himemiya.

Kanae is first introduced when Anthy Himemiya decides to let Utena Tenjou learn more about her life by meeting Akio Ohtori (Anthy's older brother). Anthy does not appear to like Kanae very much, as they don't interact most of the time while Anthy and Utena are staying with Akio, and when they do, it is implied Anthy is resentful of Kanae's closeness to her brother. Near the end of the series, Kanae is shown unresponsive while being fed apples by Akio, which could imply that she has lost herself completely.

As a Black Rose Duelist[]

Eventually, Kanae is lured into the seminar arranged by Souji Mikage. When she enters the confession booth, she sorrowfully and angrily admits that she despises Anthy Himemiya. Souji uses Kanae's anger to make Kanae a Black Rose Duellist. After challenging Utena Tenjou to a duel, Kanae is defeated by the pink-haired tomboy. After her defeat, Kanae seems to no longer hate Anthy, but she does not become any closer with her either, and aside from a short scene between the three, she does not appear again for the rest of the anime. 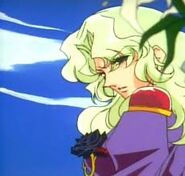