Kyouichi Saionji (西園寺 恭一 Saionji Kyouichi), is the Student Council Vice-President and the captain of the kendo team at Ohtori Academy. He is a temperamental and egotistic young man who is often cruel and he is prone to angry rages. His lack of self-control stems from insecurity and a lifelong rivalry against Touga Kiryuu from which he is always at the losing end. He is obsessed with Anthy Himemiya because he views the Rose Bride as a mindless doll who will never disobey him and thus be with him forever.

He and Touga practice kendo together, but Saionji is clearly very resentful of Touga and Saionji especially cannot bear to be humiliated by him (a fact which Touga shamelessly exploits). Saionji is less perceptive, intelligent and skilled as Touga, despite his best efforts that can never seem to best him. He is regardless affected by this estrangement from his childhood friend.

Even though he stays for a short time with Wakaba Shinohara (whose crush on him and subsequent rejection were the catalyst for Utena Tenjou's first duel) after he was expelled from school, he is ultimately drawn back to the duels. Near the end of the series, Saionji and Touga uncover parts of their shared past and seemingly reconcile their relationship.

In the movie, Saionji has a fairly small part. His personality is exaggerated on the negative side, making him appear almost psychotically angry in the beginning and delusively egotistical towards the end. He is also more blatantly abusive of the Rose Bride and his love for her is never touched upon. His relationship with Touga is non-existent.' 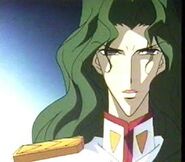 Saionji as a child with Touga Kiryuu (Episode 8)
Community content is available under CC-BY-SA unless otherwise noted.
Advertisement