Ohtori Academy is the setting of Revolutionary Girl Utena. It is a prestigious academy that houses many students, ranging from elementary school to college. The school was supposedly founded by the Ohtori family, but in Utena, it has been taken control of by the acting chairman Akio Ohtori.

Ohtori has been around for an unknown, but presumably lengthy, amount of time. Multiple generations of students have attended the school. Due to the name, it can be assumed that it is named after the family that founded it. Most buildings in the academy are made of sleek white marble. The school's buildings are arranged in a vaguely coffin-like shape, with the Central Tower in the middle. Ohtori teaches classes of all kinds, from math and art to cooking. There are many different sports teams and clubs, such as kendo, fencing and drama. The school in its current form is heavily influenced by the Student Council, who are rumored to heavily intimidate the teachers. The school is located somewhere called Houou City, in Japan.

Most of Ohtori's staff are not very competent with the exception of Akio Ohtori. Through this, Akio and the Student Council control the entire school. Akio became the chairman of Ohtori by arranging the poisoning of the original chairman. Akio entered Ohtori many years in the past, as shown in Souji Mikage's flashbacks, and has been playing the Dueling Game there for a long time.

In the movie, Ohtori's design has changed radically, as the architecture now shifts and moves at random and features much more reds and complex designs in its architecture.

Ohtori Academy has several unexplainable aspects that lead to it serving as a closed world in which the students cannot escape. Although there is nothing physically stopping anybody from leaving, the outside of Ohtori is very rarely shown and very few people ever truly leave; those that do are forgotten about by those within until the ending of the show, in which revolution occurs. Time is also stopped within Ohtori, as several characters are subtly shown to not age within it. Tokiko Chida is the only character to ever explicitly notice this, though it can be argued that Miki Kaoru is trying to figure it out as well with his stopwatch. 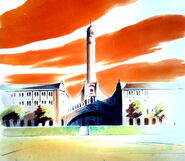