Prince Dios is the mysterious and looming figure who saves Utena Tenjou after her parent's death. Though not much is fully explained about his true thoughts and feelings, there is speculation as to if he is the princely character for either or both Anthy Himemiya and Utena. He has a devastatingly ruinous demeanor, which lead to Akio Ohtori's "birth" and Anthy's curse as the Rose Bride.

His "ghost" frequently appears in Utena's duels, as a symbol of both her noble will and facade. In addition, Dios is the projection of Akio's former self.

Dios was only a name young Akio used when he was once a prince. Many years ago, Akio was a young prince who traveled from girl to girl and provided them courage. One day, he fell ill and became incapacitated. During this period, the townsfolk and acquaintances of girls who were in dire need of his help became furious of Akio's absence. They formed a mob and eventually arrived at Anthy and Akio's hideout. Anthy, wishing to do anything for her dear brother, took all of the blame onto herself. From that day on, Akio had taken advantage of Anthy's demise in order to avoid responsibilities and pin all future blame onto her. Later, he manipulated six-year-old Utena into becoming a prince. 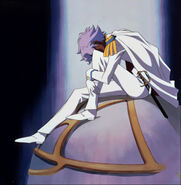