Utena Tenjou (天上ウテナ Tenjou Utena) is the protagonist of the series in every version. She is a student in her second year of middle school at Ohtori Academy who wears a boy's uniform in order to be more like her "prince".

Initially, Utena is portrayed with blonde hair and wearing a modified version of the boys' school uniform which is pink in color. In her final design in the anime and manga, Utena has waist-length straight pink hair that has bangs hanging over the right side of her face, blue eyes and she is taller than an average height. She wears a dark blue blazer with red shorts and her uniform is modified when dueling by the addition of white epaulettes to her shoulders and a gold aiguillette through Anthy Himemiya's magic.

In the movie, Utena’s hair appears to be very short, shown in an artbook to be pinned up and hidden under the remaining length of loose hair. It becomes loosened into long wavy pink hair, it flies in the wind undone whenever she is wearing her duelist outfit. Her regular uniform is a black and white blazer and matching trousers, which are unlike the normal boys' uniform, and she wears a navy cap. Utena's trousers are replaced with shorts in her dueling outfit and the addition of gold epaulettes to her shoulders, a red aiguillette and red coloring to her blazer.

Utena is a popular, passionate and intelligent girl who is looked up to by a number of her fellow pupils, at first appearing to be the total opposite of her friend and fellow protagonist Anthy Himemiya. Despite this, Utena is introverted and she has her own faults, as all at Ohtori do; she has a short temper and can be extremely impulsive as she is quick to assume others' intentions and feelings, which causes no shortage of problems among individuals as complex as Ohtori's students.

In the movie, Utena cuts a more no-nonsense and serious figure, almost to the point of pragmatism and rudeness, as part of the role reversal she and Anthy are subject to.

When Utena was 6-8 years old, her parents died in an unknown accident.

In both the anime and manga, Utena unintentionally becomes a Duelist and she wins Anthy Himemiya as the Rose Bride. Due to the critical of the Duels for objectifying the Rose Bride, Utena's desires to protect Anthy as well as a drive to act like a Prince lead her to become the Duels' most prominent Champion. As the series passes, her nobility is continuously tested, until she is finally forced to confront her own hypocrisy.

In the anime's finale, Akio Ohtori tries to convince Utena to become his princess, and despite being reminded of her own failings, Utena goes against him in the duel called Revolution. Her revived dedication to become a prince shocks Akio, and causes the destruction of the illusion castle above the arena, where Utena gets the upper hand- only to get stabbed in the back by Anthy. Her sword taken from her, Utena is forced to watch Anthy being impaled by the swords of hatred while Akio tries to open the Rose Gate with her sword. But, after being goaded by Prince Dios, Utena drags herself to the Rose Gate and pulls it open with her bare hands. Behind the Gate is Anthy, inside a coffin, who pleads for Utena to not try to save her. Utena doesn't listen and begs Anthy to take her hand. Upon doing so, the coffin breaks off of the arena and Utena is pierced by the swords in Anthy's place, which then destroy the arena. Some time after, people are starting to forget that Utena was ever at the academy, with Akio commenting that she became "another side leftover to be pitied". But, Utena did indeed get her wish, and managed to free Anthy from her bonds to the school and Akio. The anime ends with Anthy leaving the academy to find Utena.

In the movie, Utena travels to Ohtori Academy after she supposedly breaks up with Touga Kiryuu (Utena's past boyfriend) and it is also assumed that she was in an emotional turmoil (a state of great commotion, confusion or disturbance) that led her to the academy after her separation from Touga. However, she sees him on her first day on campus with her hair cut short (though it is tied up and hidden inside a cap) that gives her more of a male's appearance, which caused Kyouichi Saionji to initially mistake her for a boy. She is extremely troubled by Touga's apparent abandonment of her and her interactions with Anthy Himemiya express a level of introversion not present in the anime series, though she also shows an unpredictable streak and she is once physically violent towards Anthy in anger, in which this is said by fans to be Utena's adoption of a more masculine personality. Initially Utena's aim to be a prince is more subtle than prominent compared to the anime series. It is Touga's supposed abandonment of her that caused her to feel that she must be more independent and a "prince" by nature. Though, she states that Touga was always the prince she wanted, the movie deals with her own metamorphosis in becoming a prince. Many fans noted that Utena and Anthy seemingly swap personalities in the movie and that Utena is the one who must be saved by Anthy. Their physical appearances also seem to mirror their respective series incarnations (seeing that Utena has long wavy hair and Anthy has long straight hair, which was the opposite in the series).

Utena initially sees Anthy being mistreated and protects her, causing them to develop a deep friendship with romantic undertones. In the movie retelling/sequel, they develop romantic feelings for one another. It is heavily implied they have both a romantic and sexual bond.

Wakaba is Utena's best friend. Though they appear very close, she is unaware of Utena's involvement in dueling and often takes a backseat to the other characters where she and Utena are able to help each other despite not fully understanding each other's individual struggles.

In the third arc of the anime, Utena has an uncomfortable romantic and sexual relationship with Akio. Akio, being much older and very predatory, attempts to take advantage of Utena in order to drive her away from Anthy and make her his princess.

Utena in the Manga 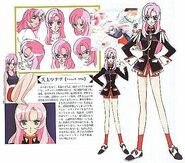 Utena in a colored manga art

Utena lying in a coffin after her parent's death 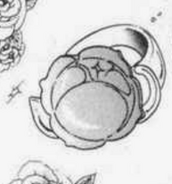 Utena's ring given to her by The Prince

Utena pulling the sword out of Anthy Himemiya in the anime 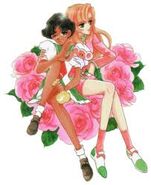 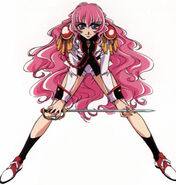